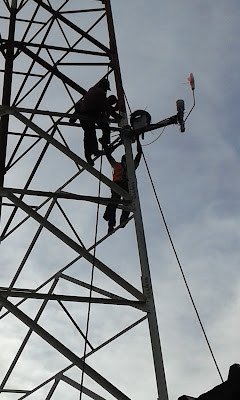 The TSAWSs, which were procured by the Uganda National Meteorological Authority (UNMA) through the UNDP-supported Strengthening Climate Information and Early Warning Systems Project, will work in concert with six already existing lightning sensors from the “Pilot Project on Severe Weather Now-casting Based on Lightning Detection in Lake Victoria Region.” This brings the total number of TSAWS sensors in Uganda to eleven.
The increased number of total lightning detection stations will now provide coverage for the Central, Eastern and Northern region of the country, and hopefully reduce the number of lightning fatalities in the country, which has been noted to have more lightning fatalities per year than anywhere else in the world.
Lightning strikes killed over 205 primary school children between 2012 and 2013. Apart from lightning, fast-acting storms and unpredicted high winds are also a cause of worry as some estimates show that around 5,000 people perish each year on Lake Victoria due to them.
The Total Solutions AWS will also integrate lightning data from neighboring networks in Burundi, Kenya and Tanzania, making for improved regional cooperation in early warning systems.
All this is part of the Government of Uganda’s efforts towards building early warning systems, with the support of UNDP’s Programme on Climate Information for Resilient Development in Africa (CIRDA) and funding from the Global Environment Facility (GEF)’s Least Developed Countries Fund.
A Focus on Sustainability
In an effort to ensure that the stations are able to work well, UNMA has partnered with local telecommunications companies, which allowed them to install the TSAWSs on their towers in the five districts of Kaliro, Sironko, Napak, Kotido and Agago (Otuke).
This not only reduced installation costs but also ensures that the stations have a continuous supply of power and communication for monitoring them as well as security from vandalism.
In addition, Earth Networks, a private weather services provider that was procured to provide the equipment, also integrated this new-generation of weather-monitoring equipment into UNMA’s existing monitoring system.
They also trained seven UNMA technicians on how to install the stations so that they are not only able carry on this installation process but also monitor it for efficient use.
“During the first installation in Kaliro, as we completed the assembly of the sensor on the ground and prepared for the hoisting, we observed some rain clouds in the distance. Since we heard no thunder, we assumed it to be safe to send the rigger up to begin the installation. However, the Earth Networks project manager logged into the WeatherBug App and saw lightning activity within 3km of the site. He advised that we wait a few minutes before proceeding,” Georgie George, Alternative Technologies Specialist for the CIRDA Programme, said.
He added that using the App enabled them to make an informed decision that kept them safe from the heavy downpour and lightning.
How the System Works
The early warning system installed in Uganda is based on networks of real-time, automatic weather stations installed on existing mobile telecommunication towers and equipped with total lightning sensors. Real-time communications are achieved through a GSM/3G/4G capable modem. This means weather reports will be shared with UNMA every minute, allowing for the creation of early alerts on fast-acting lightning storms.
In-situ observation data is integrated into cloud-based data repositories as well as nowcasting and numerical weather prediction systems. This solution provides easy access for National Hydro-Meteorological Services (NHMS) such as UNMA to surface observation and forecast data for historical analysis, as well as real-time, current weather conditions and observations.
If all the stations are operating with uninterrupted electrical power and internet communications, the pilot network around Lake Victoria provides a cloud-to-ground lightning detection efficiency of over 95 percent for the high resolution area.
It also provides intra-cloud detection efficiency of over 60 to 70 percent in the region, which enables key information on storm development and behavior to be detected in time. When working at maximum capacity, the system provides detailed total lightning data for storm cell identification and tracking in the region and serves as a tool for monitoring of storm intensity, position and movement. Lightning location accuracy is 200-300 meters within the region and less than 400 meters well beyond.
This information is then processed through cloud-computing infrastructure to create an integrated early warning solution. All the data points and layers are visually presented in a specialised display environment, which is utilized by the National Hydro-Meteorological Services (NHMS) to aid in the issuance of early warnings.


Next Steps
The new technology has introduced and aims to sustain total situational awareness across the region with real-time tracking and automated alerts of impending hazards. This means that timely and localized decisions on the issuance of early warnings can be made without having to install expensive, hard-to-maintain weather radar systems across the region.
The need for real-time data products and services requires that UNMA staff be trained to cope with the technological requirements for operation and maintenance, as well as the analysis and interpretation of data.
The new data sets, however, present an opportunity for developing new tailored weather information products for the emerging new markets, which in the long term will help to develop the economic potential and financial sustainability of UNMA.
In the long-term, the public-private partnership with Earth Networks has already delivered $500,000 in co-financing through the donation of assets, hardware and services by the company. When fully implemented this partnership has the potential to deliver an additional $1 million in shared revenue.

With financing from the Global Environment Facility’s Least Developed Country Countries Fund, and supported by UNDP and the Ministry of of Water and Environment, the Strengthening Climate Information and Early Warning Systems (SCIEWS) project in Uganda aims to support adaptation planning via an enhanced climate monitoring network and early warning systems. Securing, transferring and installing critical technologies, as well as developing and integrating the necessary systems for climate change-related information in decision-making processes, the project is working to increase the capacity of the national early warning network to forewarn and rapidly respond to extreme climate events.

Congratulations on this initiative.

However, I must note that "Lightning strikes killed over 205 primary school children between 2012 and 2013. Apart from lightning, fast-acting storms and unpredicted high winds are also a cause of worry as some estimates show that around 5,000 people perish each year on Lake Victoria due to them." these statistics seem to be an order of magnitude beyond the realistic.

Thanks for your comment. Indeed the lightning strike numbers are quite alarming. However, without effective monitoring and early warning systems, they are accurate. To learn more, visit these links. http://www.newvision.co.ug/new_vision/news/1409551/uganda-ranks-lightning-fatalities