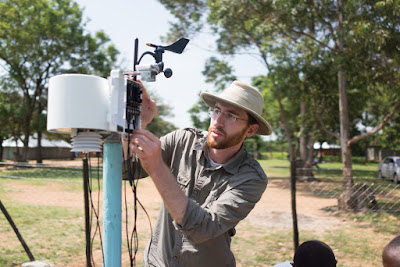 By John Selker
Africa is ready for a next-generation of weather and climate information solutions. The goal of the Trans-African Hydro-Meteorological Observatory (TAHMO) is to install 20,000 on-the-ground sensing stations across the African continent, providing high-tech automated weather stations that will produce rainfall, temperature, and other critical data with robust redundant sensors and real-time cell-phone uplink. TAHMO plans to make high-quality data freely available to governments, scientists and farmers in real time via the Internet from stations installed at 30 km spacing.

It’s no easy task, but all the right elements are falling into place to make this once lofty dream a reality. By leveraging a large mobile telecommunications platform, crowd-sourced technology that is both durable and cost-effective, and a network of rural schools, TAHMO is already making solid strides in achieving its goal.

TAHMO is currently piloting projects in Chad, Democratic Republic of Congo, Ghana, Kenya, Nigeria, Senegal, South Africa and Uganda, with stations also being prepared for installation in Malawi, Rwanda and Togo. Most notably TAHMO was selected to move into the second stage of funding for the Global Resilience Partnership Challenge, and is working with Earth Networks, Human Network International, Climate Change Adaptation Innovation, and African Centres for Lightning and Electromagnetics to create an Early Warning System around Lake Victoria, where an estimated 5,000 people die each year due to erratic weather.

In July TAHMO installed 6 automatic weather stations in southern Uganda with the support of the Ugandan National Meteorological Authority. These stations measure over a dozen weather parameters, and are self-powered by match-book-sized solar cells, and communicating via a built-in cell phone modem. In the next phase over 100 stations will provide a dense observation network.

School-2-School
Stations will be located primarily at schools and universities, with TAHMO providing science curriculum materials and connections between schools and others in the network. Hosted by science teachers who will receive stipends for their caretaking of stations, the data collected by stations will also provide a foundation for scientific education.

In March 2015, TAHMO installed a weather station at a high school near the coast of Lake Victoria as part of their School-2-School Programme. The students here will be comparing data with a sister school in Idaho, USA. This not only supports accurate, real-time weather data-gathering, but also helps build a next generation of scientists, and raise awareness of climate change and environmental stewardship.

Crowd Sourcing Innovation
Under the auspices of Delft University of Technology – a public-private consortium, comprising 14 universities and several small and large businesses –TAHMO is looking toward crowd-sourced solutions to provide low-cost hydrological and meteorological sensors.

For the past two years, the organization has hosted a Senior Design Competition to gather top thinkers to create low-cost, durable and highly advanced next-generation solutions. According to The Guardian, “TAHMO offers the prospect of cost-effective hydro-meteorological measuring stations that are low maintenance. The stations will cost only $500, but will be technologically innovative by deploying low-cost sensors (as found in objects ranging from washing machines to cars and smart phones) marshalled to serve as weather or water sensors. For instance, the simple piezo buzzer (costing $1), which is used in fire alarms, will be used to measure rainfall intensity.”

TAHMO developed a prototype of an acoustic disdrometer (rain gauge) that can be produced for €10, less than one percent of the cost of a commercial equivalent with the same specifications. The disdrometer was developed in The Netherlands and tested in Tanzania for a total project cost of €5000.

A recent WMO survey indicates that 54 percent of the surface and 71 percent of the upper-air weather stations in Sub-Saharan Africa are not reporting data. By leapfrogging technology, TAHMO aspires to make Africa one of “the best-monitored continents in the world.”

John Selker is a Professor of Hydrology at Oregon State University and the Co-Director of TAHMO. His research and development work on sensing applies to irrigation, hydrology and water systems. To learn more about TAHMO, visit www.tahmo.org.

Hot Links
TAHMO in the news