By Michael Krisch
In the past few years, "design thinking" has become a buzzword that has infiltrated all sectors of business and academia. Harvard Business Review, in a cover article on the topic, posits the rise in complex technologies and the need for easy interfaces as reasons for the surge. But ultimately, what is design thinking and why is it all the rage? And how did Climate Action Hackathon developers apply basic design thinking principles to design and prototype useful applications?
What in the world is design thinking?
In short, "design thinking" is a framework for asking questions. It puts the user at the center of all design decisions, and encourages solutions that best meet the user's needs.
More derisively, people think of it as that technique where you write on Post-it notes with permanent marker, then stick them on white boards.
In November 2015, New York Times tech reporter Steve Lohr wrote a piece documenting IBM’s recent investment in design. Perhaps my favorite part of the article came in the form of a reactionary letter to the editor, where a long-time employee called out design thinking, saying, "I was putting Post-it notes in “parking lots” before a lot of the IBM new hires were even born."
“The software development life cycle," the commenter wrote, "A process that has been followed for decades, has as its initial task the identification and documentation of user needs, or requirements. So, nothing really new here.”
And the respondent is right, in a way. A lot of praise for design thinking implies that never before have software developers – or international development practitioners – asked questions of their users.
That said, I see two differences between status quo and the rise of design thinking: need finding and rapid prototyping. 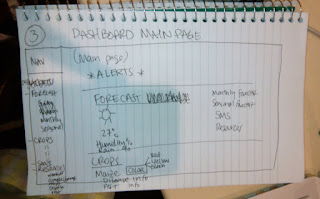 In the need-finding phase, design thinking places emphasis on the human experience. An article by John Zimmerman and Jodi Forlizzi, Professors of Human Computer Interaction (HCI) at Carnegie Mellon, says that the newly varied uses of computer technology has forced HCI to "[shift] its focus from a narrow view on usability — increasing the efficiency and effectiveness of task completion — to more broadly consider the human experience." Now that they're solving problems about how people interact with computers in their everyday lives (instead of just at an office), design thinking is critical for evaluating possible issues and solutions.
Though most commonly associated with software development, design thinking has applications beyond engineering to any field where a designer must respond to the needs of a client or user, while weeding out personal bias in the process.
Architect Renzo Piano acknowledged the need for such a process in his 1998 Pritzker Architecture Prize acceptance speech, saying, "There is always the temptation to impose one’s own design, one’s own way of thinking or, even worse, one’s own style. I believe, instead, that a light approach is needed. Light, but without abandoning the stubbornness that enables you to put forward your own ideas whilst being permeable to the ideas of others."
Design thinking seeks to create a framework for providing just such a light – but firm – touch.
After conducting initial need-finding, design thinking instructs designers to go through a period of rapid prototyping. Fortunately, there are many products on the market today that make it easy for anyone to whip up a functioning web application – accessible across an array of servers around the world – in as little as five minutes and at nominal cost.
"Deploy or die," declared MIT Media Lab Director Joi Ito in his TED talk. “The Internet caused innovation...to go from an MBA-driven innovation model to a designer-engineer-driven innovation model and it pushed innovation to edges, to the dorm rooms and startup,” he explained.
With great fortune, the Brown Institute for Media Innovation is situated squarely at the edges he's describing.
At Brown, we’ve been experimenting with design thinking and rapid prototyping as an approach to start each of our projects, as well as a strategy for continually testing the applications being developed and the stories being told.
For me, it's most interesting application has been in the design of software for a market absent of options. This has come in projects like Nueva Nacion–- an inaugural framework for viewing Panama's government data – or in our Base Camp workshops, which have spawned projects like open.contractors, a dashboard for visualizing the mess that is U.S. contracting data.
Addressing User Needs at the Climate Action Hackathon
And the importance of human centered design has never been more clear than through the Climate Action Hackathon, held in partnership with the UNDP’s Programme on Climate Information for Resilient Development in Africa (CIRDA). 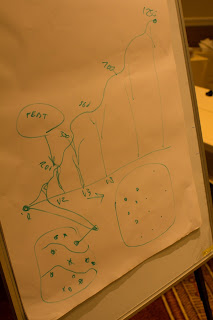 Hackathon participants made their way to beautiful Livingstone, Zambia, where they spent their first day as observers, listening in on a CIRDA workshop addressing “tailored climate information services,” and taking note of the problems facing both the meteorological (met) departments and the vulnerable end-users these departments are meant to serve. Participants were then given 27 hours to build applications to address one (or many) of these challenges. And in those 27 hours, the need for human centered design took center stage.
Each of the projects pitched at the hackathon fills a niche in the barren technological landscape of the 11 Least Developed Countries countries that CIRDA has been working with to improve access to climate and weather information. That's not to say that amazing products addressing climate change and agriculture in Africa don't exist – looking at you Esoko and HNI! – but the field appears to be relatively open, especially in contrast to the landscape I'm most familiar with, the US.
Because of this, very little documentation exists around the technological relationship between met departments and agriculturalists, agricultural extension officers and farmers – a good start is found through the Participatory Integrated Climate Services for Agriculture (PICSA) approach – but more work needs to be done to connect developers with end-users and support this need-finding mission.
One hackathon project, Extend, developed by a group of five talented programmers from three different continents, is a platform for agricultural extension officers to monitor and communicate weather and climate information to farmers.
For those removed from the environment (me), let me explain. Met services in the countries supported by the CIRDA Programme collect data from weather stations around the country. This data is then turned into information which could easily be shared with extension officers. From there, extension officers turn this information (seasonal and short-term forecasts) into usable data for farmers, be it advice on planting, fertilization, use of pesticide, watering, etc. Extend turns this manual and analog process into an automatic digital one.
From a facilitator's perspective, the reason this project was so successful stemmed from its continual dedication to need-finding. From the start, the team elected members devoted to need finding/user research, not programming.
Instead of assuming they had absorbed the complexities of the challenges facing the met services in a day of plenary, they acknowledged the importance of asking questions. Perhaps more important, the team determined the questions and challenges that were out of scope of their project. This is quality design thinking at play.
After spending the last weeks reflecting on the hackathon, we're excited about next steps. The teams forged in Zambia continue to work virtually, with the goal of creating solid products that could be of use in bridging the gap between Met service and end-user. The first thing we plan to tackle as we continue to incubate these innovations: on-the-ground reporting and need finding.
Interested practitioners in Communications for Development, agriculture and extension are invited to connect with our hacker teams. Here’s a look at each project.
Hackathon Projects
ClimarThe Climar Project is a climate information sharing platform that provides tailored advice to different sectors of the economy with recorded information in local languages. They tackled the unique need of regional linguistic differences.

The Knife’s Edge (Extend)Via a web-based dashboard, Extension Officers will receive collated, analysed data through the Extend Platform. The unique user behavior that this project initially addresses is that Extension Officers are trusted sources of information. They also tend to have access to reliable electricity and electronic communications, and connect with local farmers in local languages on a regular basis.

Climate FrameClimate Frame also worked with Extension Officers, adding a simple text message that would allow illiterate farmers to know when to plant and water via symbolic text messages sent over SMS. Many end-users of climate information are illiterate, this initiative responds to that need.

The #mLisho ProjectThe mLisho Project created a basic early warning system platform that uses a mobile phone SMS API to send sustainability and market information to nomadic pastoralists based on predictions of range land productivity and market studies. Wow! This is a tough group to crack, and it was a bold move on the part of mLisho to even attempt it. The needs of behaviors of pastoralists are far different from those of traditional farmers. How they will get this information based on their media habits, access to electricity, movements, etc., will be a challenge that should be addressed with further need finding and understanding of how pastoralists connect with the world beyond their pastors.

The Farmers’ Guide ProjectThis project works to provide farmers with improved information on when to plant and how to maximize profits and productivity. This works to address a need to become more productive. Design thinking would ask us not just what people need to become more productive on their farms, but how their farms work, how they connect with information and how they use this information on a daily basis. It may turn out that connecting directly with farmers is a tough road to haul. Perhaps a kiosk at a farmer’s coop or an electronic notice board on the town well would allow National Met Services to connect better with these groups.


Video
What is Design Thinking


Michael Krisch was a co-facilitator at the UNDP Climate Action Hackathon in Zambia. Michael joined the Brown Institute as its Deputy Director in December of 2013. Michael is also the founder of Communal Craft, an independent design studio based in New York City. Previously, he worked on web strategy at Columbia Law School. Michael earned both his undergraduate and graduate degrees from Georgetown University, where he majored in English and studio art and attained a master’s in journalism.