On the Different Types of Weather Observations- Part I 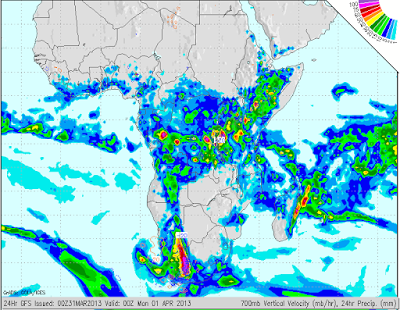 Synoptic Observations
Usually when meteorologists speak of observations, unless they qualify their comments, they are referring to what are termed “synoptic observations”. The term “synoptic” means "affording a general view of the whole". Thus synoptic observations are made to characterize and quantify the weather over a large region at particular moments in time (usually periodically at 3-hour or 6-hour intervals). Each such observation includes data on sky cover, state of the sky, cloud height, atmospheric pressure reduced to sea level, temperature, dew point, wind speed and direction, amount of types of precipitation, and other information on observed atmospheric phenomena. Synoptic observations are reported to the Global Telecommunication System managed by WMO to be shared with meteorologists around the world.

When synoptic observations from across a continent are collected and analyzed, they provide meteorologists a picture of surface weather events occurring on spatial scales of several hundreds to a few thousand kilometers and time scales of a few hours; these are termed synoptic scale events. The large low and high pressure systems and accompanying frontal systems found in mid- and high-latitudes are examples of synoptic scale weather phenomena.

For aviation observations, the guidance of both the WMO and the International Civil Aviation Organization (ICAO) apply. In accordance with such guidance, the instruments used to make such observations are normally exposed so as to provide data representative of runway conditions, which may be quite different from those observed by a synoptic observation site.


If the spatial density of locations making aviation/hourly observations is sufficiently high, then when such observations are collected and analyzed by the NHMS, these hourly observations can provide a provide meteorologists with a picture of weather events occurring on spatial scales of a hundred to a thousand kilometers and time scales of about one hour; these are termed sub-synoptic (in the sense of “edge of the synoptic”) or meso-alpha scale events. Phenomena like squall lines, mesoscale convective clusters, and tropical waves occur on this scale. (However, tropical and subtropical cyclones are classified by the U.S. National Hurricane Center as synoptic-scale phenomena.)


The CIRDA Programme is the UNDP Multi-Country Support Programme to Strengthen Climate Information Systems in Africa. Click here to learn more about it.