A New Vision for Weather and Climate Services in Africa 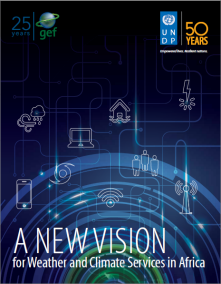 Marrakesh, Morocco, 10 November 2016 – During today’s climate talks in Marrakesh, the United Nations Development Programme (UNDP) launched a report that focuses on a new approach adopted by African leaders to proactively support the sustainability of investments in weather and climate services across the continent.

The report, “A New Vision for Weather and Climate Services in Africa,” highlights new technologies and new approaches that will enable sub-Saharan African countries to support the sustainability of investments in the weather and climate services sector, and improve efforts to adapt to a changing climate in Africa.

“As we move further into the 21st century and the average global temperature increases, we are likely to witness more frequent and severe weather, droughts, floods, and sea level rise around the globe. If not addressed, as committed to by world leaders in Paris, climate change will be a major challenge to efforts to achieve the Sustainable Development Goals,” said Bonizella Biagini, Programme Manager for UNDP’s Programme on Climate Information for Resilient Development in Africa (CIRDA). “Providing accurate, reliable, and timely weather and climate information is central to building resilience to climate change, empowering nations, saving lives and strengthening livelihoods across Africa’s most vulnerable communities.”

On a macro-economic and global policy level, a failure to accurately provide warnings on fast-acting storms and other extreme climate events not only takes lives, it also affects production levels and hinders economic development, according to the report. Citing a joint study from the World Meteorological Organization and the Centre for Research on the Epidemiology of Disasters, the report concludes that “from 1970 to 2012, there were 1,319 reported weather-related disasters in Africa that caused the loss of 698,380 lives and economic damages of US$26.6 billion.”  The Intergovernmental Panel on Climate Change has also identified Africa as the continent most vulnerable to climate change, with projected reductions in agricultural yield as much as 50 percent and net crop revenues dropping by up to 90 percent by 2100.
Investing in weather and climate services is a smart investment, according to report authors. World Bank estimates indicate that “upgrading all hydro-meteorological information production and early-warning capacity in developing countries would save an average of 23,000 lives annually and would provide between US$3 billion and US$30 billion per year in additional economic benefits related to disaster reduction.”
“While people in Africa have contributed the least to human-induced climate change, they are among the most vulnerable to its effects. Every year, thousands of lives and countless millions of dollars of livelihoods, crops, and infrastructure investments are lost due to severe weather, contributing to a poverty trap,” said Biagini. “Timely and effective early warnings and improved climate information can help minimize these losses by improving decision making in government and communities.  Businesses, from the large to the micro, benefit from access to quality and localized weather information.”

Citing a study on climate change adaptation from the World Bank’s Independent Evaluation Group, the report underlines that “Since the mid-1980s, donor support for modernizing weather and climate services in developing countries has conservatively totalled almost $1 billion, with the majority of commitments since 2000. Nevertheless, a recent World Meteorological Organization (WMO) monitoring survey showed that ‘54% of the surface and 71% of the upper air weather stations in the region did not report data.”

“This often is due to the lack of technical expertise and experience, together with minimal budgets that limit the capacity to invest in novel solutions for weather and climate services in Africa. The solutions, however, exist and can be affordable,” Biagini said.
Many of the challenges arise from attempts to utilize weather monitoring systems originally created for use in developed countries, such as radars, which, according the report, can be costly and difficult to maintain.

“The design and materials in such equipment are often inappropriate for the arid and tropical environments found throughout much of sub-Saharan Africa,” said report co-author John Snow, Dean Emeritus at Oklahoma University’s College of Atmospheric and Geographic Sciences. “Such equipment is difficult to maintain in these harsh environments. Equipment is often bought without allowance for the true costs of operation and maintenance, or without consideration of the costs associated with the inevitable technological changes that require regular updates and continuous staff retraining.”

The poor service and consequent loss of NHMS credibility resulting from failure to adequately address such challenges often produces a non-virtuous cycle of continually weakening political and financial support, according to report authors.

A New Vision for Technology
The report looks to promising advances in technologies, along with more effective coordination with the private sector to improve the sustainability of investments in the weather and climate services sector in sub-Saharan Africa. The approach proposed also builds on the rapid extension of mobile phone services throughout Africa, which provides both tower sites with power and security for weather stations, and real-time communication critical for delivery of data to central meteorological offices and of products from the central offices to users.

“This new vision goes beyond the simple procurement and installation of new technologies, to an end-to-end systems approach,” said Uganda Minister of Water and Environment Sam Cheptoris. “There is no silver bullet, but with effectively structured public-private partnerships, new technology and services, strengthened institutions, increased regional cooperation and continued capacity building, sustainable hydromet solutions are a realistic and attainable goal.”

According to report authors, the technological basis for this new vision is relatively recent innovations in weather and climate monitoring, analysis and forecasting technologies, as well as parallel advances in computing and cellular telecommunication services.
The new technologies described in the report include low-cost All-in-One Automatic Weather Stations, lightning location sensors, automatic water level and stream gages, and central automated systems for data collection, integration and analysis.

“These technologies, together with modern forecaster workstations, comprise a end-to-end hydromet monitoring and forecasting system well suited to the constraints and capabilities of developing countries,” Snow said.

A New Vision for Public-Private Partnerships
While the hardware is relatively straightforward, it can only be applied fully and effectively if the public sector takes the lead to engage a new group of private-sector actors that are working in the climate and weather services space, according to the report.

According to the report’s analysis, a number of sectors, such as aviation, agriculture, banking, energy, insurance, resource extraction and telecommunications are willing to pay for high-quality weather and climate information products. In order to produce these products, the report authors suggest National HydroMeteorological Services engage with private sector weather service providers and establish revenue-sharing agreements.

“Substantial market dynamics are stimulating our partner countries to redefine the way they think about climate and weather services,” said Biagini. “What becomes clear is that the status quo is not working enough as too many lives are lost every day. African governments are therefore taking the lead – with the support of the international donor community, the private sector, and organizations like UNDP, the World Meteorological Organization and the World Bank, among others – to find a more effective way to deploy climate and weather services and look to an integrated approach that focuses on sustainability, end-to-end services, and bespoke country-driven approaches.”